The time have come to say goodbye to Elliot Alderson and man we were not ready. The series finale was mind blowing and fit for such a rollercoaster of a season. We’d also like to send a shout out to our partner in crime Japser who runs Martin Wallström Online for sticking with us through this journey and helping with the screencaptures of this last season of Mr. Robot. Head to the gallery for the last update of Mr. Robot.

Rami stopped by Good Morning America when the new Bond trailer dropped and we had a sneak peek of how fun and amazing the new press tour is going to be with Daniel Craig. Check out the video below and the photo coverage in the gallery.

Rami stopped by The Late Show with Stephen Colbert where he got to talked about the ending of Mr. Robot and his upcoming role in the Bond series. Check out the photos and video below. 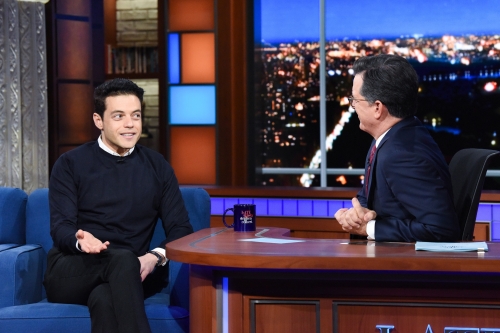 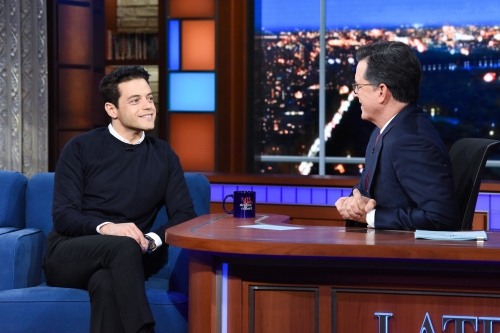 Rami Malek is having a good hair day. “This is the best his hair’s been since February,” says the young woman twirling scented oil through Malek’s strands while the actor stands obediently still, slightly bashful, like anyone who is being publicly oiled. His hair looks exactly the way it does in every episode of Mr. Robot, which is at the tail end of shooting its final season here in Brooklyn. The hair is worth mentioning because it has spawned a mini men’s version of the Rachel, Jennifer Aniston’s hair on Friends, in that it is easily identifiable and widely imitated. “It’s a two on the sides that’s faded to a one and a half,” says the young woman with the oil, in case anyone wants to memorize that and take it to the barber. “And it’s disconnected from the top to the sides and faded up to the parietal ridge.”
“This is GQ, not National Geographic,”Malek says. “Disconnected is appropriate, though.”

It is. Malek had been acting for more than a decade when he got the part of Elliot Alderson on Mr. Robot, which came out in 2015 on USA, of all networks, and immediately generated a robust Reddit presence and an ardent audience of people for whom a dystopian but sensitive thriller felt appropriate in an age of deep fakes and flourishing conspiracies. Elliot works as a cybersecurity technician who gets embroiled in a hacktivist scheme to wrest financial justice from an evil corporation. He has a rocky relationship with humanity but a lucid one with the technological reality of the world we live in. You get the sense, in watching, that if you knew what he did, you’d microwave your SIM cards and self-medicate with morphine, too.

For three years Malek’s fame gently increased as the show’s influence grew. In 2016 he won an Emmy. Then he starred as Freddie Mercury in Bohemian Rhapsody, which became the highest-grossing music biopic of all time, and he swept awards season, receiving a Golden Globe, a SAG Award, a BAFTA Award, and, of course, an Oscar, for which he gave a graceful acceptance speech that touched on his status as the son of immigrants. Next year he’ll play the villain in the new James Bond movie with Daniel Craig. Descriptions of his rise often involve violent metaphors (catapulting to stardom, exploding into the zeitgeist), which is inadvertently appropriate for someone who physically falls down as much as Malek. [More at Source]

Rami attended the 2019 Met Gala Celebrating Camp: Notes on Fashion with YSL this year. He posed on the red carpet with his fellow brand ambassador Charlotte Gainsbourg. I’ve updated the gallery with over 100 photos, enjoy!

Rami was one of a few celebrities who joined SAG-AFTRA Foundation’s Storyline Online. From their website:

Storyline Online is a program of the SAG-AFTRA Foundation. The Foundation is a nonprofit organisation that relies entirely on gifts, grants and donations to fund Storyline Online and produce all of its videos.